Skip to content
It’s a big Universe, yet here you are on this page.
I’m Livtar Singh Khalsa. I’ve been playing and performing music ever since my early teens. But I only began writing music after I STARTED DOING YOGA AND MEDITATION! That was 1969 in Orlando, Florida.
It was the 60’s. There were hippies. There were the straights. I didn’t want to go either of those routes. I found my teacher, Yogi Bhajan. I discovered there was another route for my life.
My meditative experiences opened a channel in me that I had never been able to touch. Energized and experiencing astonishing new things, music became my way of explaining and teaching.
In my “career”, I have played the Troubadour in L.A. I sang acapella to 120,000 upset fans at Baton Rouge Pop in 1971. I toured the U.S.. with The Khalsa String Band. Seal once backed me on stage.
But my greatest honor was that I was the channel to create “Song of the Khalsa”, a song that is sung by Sikhs all over the world.
I never wanted to be a “Musician”, it was just something for me and whomever wanted to listen. I have recorded with friends over the years, but not my own stuff since long ago. So after much prodding by friends and family, this is the 1st album in 30 years of my own music.

You are invited to join me in the journey. 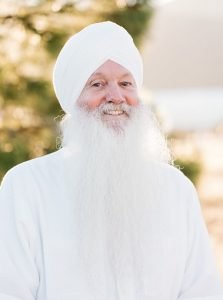